I’ve been saying that over and over. Hi-Fi is getting better and better, year after year. While some companies are skyrocketing with premium prices, it is brands like JDS Labs who deliver insane bang for a buck. Their policy is no-nonsense, well-engineered devices that provide killer specs in their class (…and not only there). JDS Labs website is a gold nugget in itself. Not only you can find important updates there, but they also have nice in-depth releases of new products. They tell you not only what changed but also why you should bother about it.

The best part though was the subpage introducing their performance standards with an easy-to-understand description of what does each parameter means to you. Highly recommended to check that out, you’ll be thrilled. This time around will be taking a look at a set of DAC+ and AMP+, which are their entry-level solution. I really appreciate that they’ve specifically written AMP+ has just enough power to drive almost anything. You’ve got to appreciate down to earth approach, nobody is gonna plug Susvaras into that combo. I mean, I might know a guy… His name starts with a „P” and ends with a „-aweł”. He might also be my boss.

Both devices come in simple, robust boxes. Nothing fancy, money got spent elsewhere. At first sight, they look unassuming. Simple, plastic boxes with JDS Labs logo on top. I don’t know why, but both ATOM AMP and ATOM AMP+ have their potentiometer not perfectly centered. It’s offset to the left, just enough for you to notice. Both units come with simple, transformer-based power bricks. Rectification and regulation are done inside of each unit. As JDS Labs have said on their blog, it’s the power supply that limits the ATOM AMP+ power output.

Welcome to 2021 when DACs got so integrated there is nothing to talk about. It’s a joke…but it’s kinda true though. It’s crazy how we can take a few chips and build something that measures very well for the equivalent of lunch money. When something is both cheap and very good you know that somebody did some thinking about it. From the previous generation, we see an introduction of a new DAC chip, ESS Sabre of the first generation – ES9018K2M. It’s a two-channel, scaled-down version of their flagship. At the time you could find it in many very expensive converters. But, and that’s a big butt it’s not that simple, putting pieces together like LEGO. ESS chips are known to pain in the said butt. Its high-performance interior is pickier than my best friend’s one-year-old son. Folks in JDS Labs spent some sleepless nights tuning in the output stage and selecting actual parts that go in there. The second, but the not less important piece is proprietary software that receives data from the USB and optical inputs and shapes them, before sending them to DAC. It all gets done inside the XMOS microcontroller. Every year software gets more and more important, naturally, that includes audio. Also, JDS Labs offers different software for this DAC that makes its harmonic distortion much more tube-like. You can find it on their blog post regarding the DAC+ release. It’s worth a shot! Oh, and also we got optical input, which is an amazing upgrade over the original ATOM DAC. Why not double it as DAC for TV setup? Now you can.

From the outside, we don’t have anything fancy. Single 6,3 mm output, gain selector, and input selector. On the backplate, there are two inputs: RCA and a 3,5 mm jack. If you want to use it as a preamp, you do get RCA outputs. Inside we have what seems to be the standard headphone amp from some time. It’s an opamp-driven LME49600 current buffer. It checks all the boxes: nice power output (1 W RMS @ 32 Ohm), low output impedance, very low distortion, and noise. From the last version of Atom AMP, two main things have changed. First, input opamp together with some resistors surrounding it. JRC2068 got replaced by JRC5532, a true classic. When you listen to any music, you can bet that it went through some 5532s when it was recorded, mixed, and mastered. The second change was finding new, better potentiometers. They achieved 20dB better pairing between sliders with a new part. That’s an impressive feat. Manufacturers of previous generation pots – ALPS have lately lowered overall quality. Very sad indeed, as it’s a very renowned company after all. Also, as a DIYer, I can really appreciate the length they went to get some good quality potentiometers. It’s not easy, trust me!

The setup for this review consisted mainly of my PC as the source and a pair of HiFiMan HE400se. Those cans seem to be a very natural pairing looking at both prices and performance level of all included. Additional tests were done with the previous generation of JDS Labs ATOM AMP and ATOM DAC. Deconi Blue headphones were my backup. Playback was going through both Tidal app for Windows and Foobar2000. I restrained myself from going with Roon to keep the whole setup reasonable, but I completely get it if someone wants to go that route.

Overall the sound signature was dominated by HE400se, as it should be. JDS Labs says they want to provide the best overall quality at a low budget and they certainly do. Their combo with a „+” has a nice hint of warmth, which is absolutely perfect for me. The other most obvious thing is that DAC is based on ESS Sabre chip. You can’t mistake that bass and overall „style” for anything else.

Both HiFiMans and Dekoni are not providing the best-in-class performance in this regard. My understanding is that they have shaped this part of sound the most. The best result I got with HE400se. The whole presentation was a rather close one. What I appreciated was that there was a clear separation in-depth as sound sources were appearing closer and further, even at the same time. That’s commendable at this price range.

Well, what do you expect? Sabre put together with a reasonably powerful solid-state amplifier will make your EDM dreams come true baby! For example, take Doin’ It Right from Daft Punk’s most overused album Random Access Memories. Together with Panda Bear, they set the tone from the first notes. Powerful, round and a bit overwhelming bass will pour onto your ears. Just like the french duo intended it to be.

On the other side of the fence, I listened to Megadeath Skin O’ My Teeth, the intro drums can slam a deadman into breakdancing. Perfect control over not the most sensitive HiFiMans. Paired with Dekoni Blue you get all the warmth and punch they promise to deliver. They are the ultimate basshead cans and I see why. If you look for texture and resolution in this range don’t worry. String instruments sound very natural and have a very nice presence. Miles Mosley in his song Abraham goes insane on his bass and you get to hear all of the craziness that ensues. This spectrum in ATOM + is just insanely good at this price and not only at it.

At first, I was a bit afraid that the sound will be a bit dry – an issue I have with Sabre DACs. Well, my friend, not today. They have pulled off a very well-balanced, full sound. It doesn’t feel nervous at all. I think this is where most of their work in tuning the output stage went. Take a look at Cat Stevens Tea For Tillerman album. It focuses heavily on both his voice and guitar. What I really appreciate here is that midrange is full of detail and has nice dynamics to it, especially the acoustic guitars. I have very resolving (and very expensive) speakers with studio backgrounds and I don’t feel like they give me this amount of detail like this, not too expensive setup. There, I said it. If you really want to appreciate the quality of this combo, try Nils Lofgren – Keith Don’t Go Acoustic Live. Shivers, just shivers.

Try The Pretty Reckless – My Medicine – a song that I like, but hate listening to. It’s recorded in a particularly bright way. It’s my test to see if reviewed setup likes to round up the sound to make it nicer. I think that JDS Labs combo calmed Taylor Momsens vocals and drum cymbals to a level where you can enjoy it without losing detail and information. I think that highs are the calmest range as presented by ATOM+ set. It’s great for anybody who plans to use them for a long time. You just don’t get tired. Compared to the neighbor – the mids – here I can feel that it’s not as detailed and refined as them. High frequencies deliver a slightly rounded tone, just a bit behind mids. It’s not the most revealing, crystal clear highs, there are other combos that will do that better if that’s your thing. For all the rest it’s a really solid performance, just not as amazing as bass and mids. Can’t have them all, can you?

My biggest surprise was that the two generations have quite a difference in sound. Older siblings sound brighter, possibly more natural actually. The newest offering from JDS Labs brings not only warmth but also better resolution and nicer dynamics. AMP+ is straight up an upgrade. DAC+ excels in bass (them Sabre chips…) resolution, speed, and overall sound quality. AKM based old ATOM DAC has a more laid-back, analog-like presentation and nicer high frequencies. For Dekoni Blues I’d rather get old gen setup as they would compliment each other nicely. For my daily drivers and all of you looking for a starter set get new ones. They are just better.

It’s a steal. If you like a resolving, balanced and universal combo that will get you started in a headphones world I think this is it. If I had to describe the sound of it, it’s just fun. You will also have a lot more mileage than you expect from it. It drives most reasonable headphones on the market. DAC plays basically any file that you might have. If your starting budget is larger I would urge you to get this combo and get more cans. JDS plus series will allow you to take full advantage from having different headphones on hand while making sure they are driven to their fullest potential. I strongly recommend DAC+ and AMP+, while being very happy that they are joining my reference for further reviews. They make for both a great daily setup and a universal tool for more demanding users. It’s great being an audiophile in 2021, let me tell you. 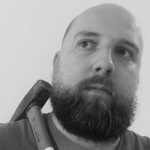 I can really say “been there, done that” in regard to audio. Designing, building, fixing, reviewing, selling. All of that for big boy stereo. Headphones are something new and fresh for me. We all need something exciting now and then, so join me in my quest of discovering this cool world. We will listen to, drink and WE WILL bring the balance to the force. Oh, I like beer.